#1
down vote
favorite
I am comparing maths and chemistry scores of students in several schools. I am not comparing the schools with each other. I am just trying to say that students do better in maths than in chemistry in all of the schools studied. So I am comparing the maths and chemistry scores with each other within a school not between schools.
The data is normally distributed for both maths and chemistry in certain schools and not others.
Should I do a non-parametric for all? or just do parametric for those with normal distribution and for non-parametric for those without normal distribution?
what is the wisest decision to make?
Is it usual and not strange to report let's say Mann-Whitney U test for Schools 1 to 3 and one-Way anova for schools 4 and 5? Is this kind of reporting normal given that I want to put all the results in one bar chart as below? By the way, the results will be published as an article in a scientific journal. 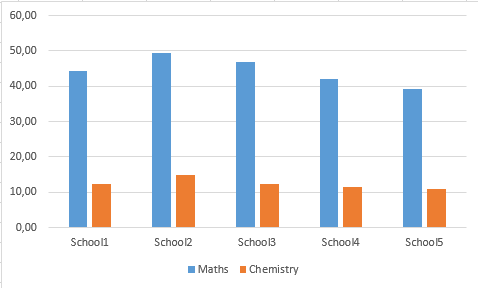