I want to build a regression model with 4 variables that display the best AOC values if taken individually. I would like it to include the 4 variables, because a model with more variables displays a bigger AOC value and should be better in predicting the outcome (clinical form of MS). However, if I add all these 4 variables into the equation, most of their p values and confidence intervals show them to be not significant. I am pretty sure this is a multicollinearity issue as the values change significantly if I remove one or a few of the variables (event though the VIF values are not more than ~3) . The biggest number of variables with which all of the variables in the equation are shown to be significant for the model is two.

Therefore my question is it possible to build a model with more than two independent variables in this case and somehow overcome the multicollinearity issue or should I stick to only two.

#2
kranas said:
I am pretty sure this is a multicollinearity issue as the values change significantly if I remove one or a few of the variables (event though the VIF values are not more than ~3)
Click to expand...
Did you actually check for multicollinearity (i.e., calculating pairwise correlation coeff among your predictors)? From what you wrote, it seems that you are just guessing the presence of highly correlated predictors.
K

#3
I'm guessing it should be because of multicollinearity, because individually (or with max two variables) the variables display significant results in the equation, but after adding the 4 variables into one binary logistic regression in SPSS the p values and confidence intervals rise significantly.
Here are regression results with all 4 variables that display the biggest AUC values individually and the correlation matrix: 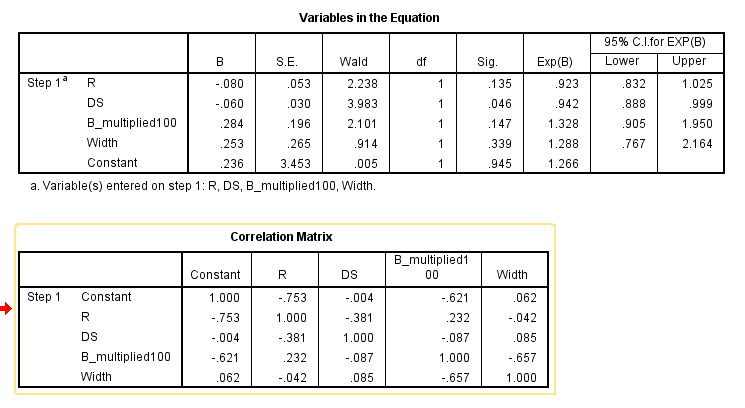